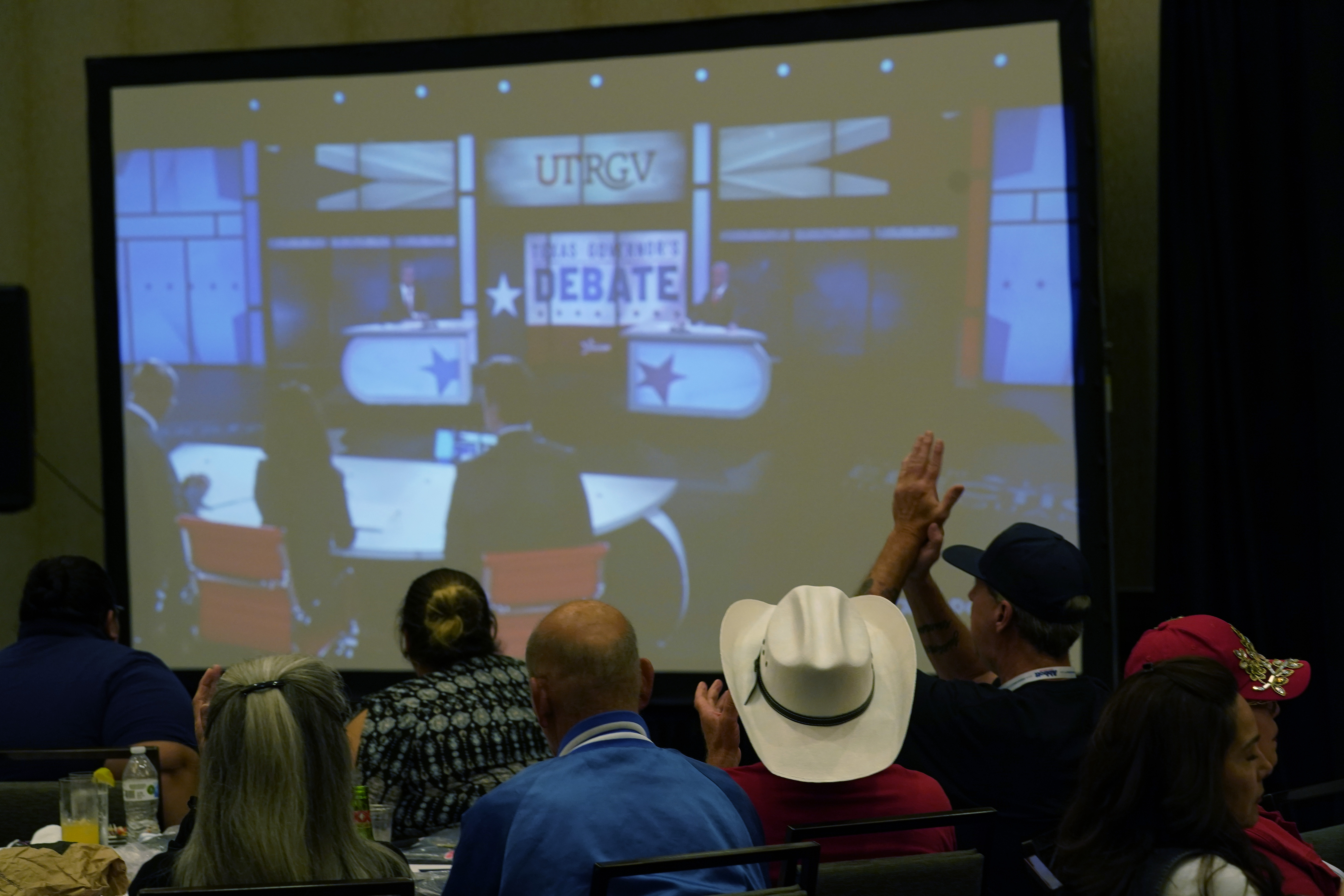 Though they touched on a variety of topics, these are the three main takeaways from the night:

The night started on immigration, an issue one of the anchors called “especially relevant here in the Rio Grande Valley” and which polls as one of the highest priorities for Texas voters.

Abbott’s campaign has centered immigration and security for months after the state legislature advocated billions of dollars to increase investment for enforcement and arrests along the border. Abbott defended the Lone Star program but said the number allocated was too high.

“Zero dollars should be going to Operation Lone Star, and that’s what it would be if we had a president who is enforcing the immigration laws of the United States of America,” Abbott said. O’Rourke criticized the governor’s spending of tax dollars on the “political theater” program.

For months, the governor has sent buses of migrants from Texas to blue cities, a move other governors — like Florida’s Ron DeSantis — have followed. The two candidates clashed over the program, with Abbott answering criticism there had been no communications between Texas and the cities over the busings.

In response to a question about sanctuary cities receiving buses of migrants, O’Rourke said, “I live on the border, no one cares more about the security and safety of the border than those who are raising our children there.” During his time on the city council, O’Rourke added, “we were able to help make El Paso, Texas one of the safest cities in the United States of America because we were looking at solutions instead of stunts.”

Gun control has been a critical part of O’Rourke’s political platform following the mass shooting in his hometown of El Paso in 2019. The school shooting in Uvalde renewed urgency among national Democrats and some Republicans on passing new gun safety laws — which O’Rourke embraced as part of his campaign, including an explicit response to a heckler during an August town hall.

“We want to end school shootings, but we cannot do that by making false promises. It is a false promise to suggest that we can pass a law that will be upheld by the Constitution to raise the age,” Abbott said, referring to an earlier federal court of appeals decision that struck down an age ban on obtaining a handgun carry license. He added his views come “purely from a legal position” based on that decision.

In the past, O’Rourke said he supported removing Texans’ assault-style weapons, but has more recently shifted away from that position. He said as governor, he would be focused on what was possible to accomplish, including universal background checks and raising the minimum age of purchase to 21.

One anchor asked why the governor had not called a special session on guns in the wake of the Uvalde shooting, considering he summoned the legislature multiple times last year. Abbott said it was unnecessary to call one so soon after the shooting just to take action, but the subject will come up when the chambers reconvene in January.

O’Rourke responded by referencing Abbott’s infamous comments soon after the shooting, where the governor said that “as horrible as what happened [in Uvalde], it could have been worse” had law enforcement not been at the scene. Abbott said he had been misled about the mishandled situation, and did not know that dozens of officers were outside the school for more than an hour without engaging the shooter.

“The buck stops on your desk. You blame everyone else, you blame Joe Biden,” O’Rourke fired back, before being interrupted for exceeding time.

Texas’ state legislature was one of the leaders in setting strict abortion laws last year ahead of the fall of Roe v. Wade, when Abbott signed a law allowing private citizens to sue those who “aid and abet” in providing abortion care. Restrictions tightened when the Supreme Court issued its ruling ending a national right to abortion earlier this year, with Texas and other states immediately enacting laws that banned the procedure altogether.

Despite the strong influence of the Republican legislature on national politics, a variety of polls show a slight majority of Texans approve of loosening the state’s restrictions on abortion. The Texas Hispanic Policy Foundation found this month that around 11 percent of surveyed voters say the current laws don’t go far enough, while 37 percent believe the laws should remain as is.

Abbott repeated his stance that the Plan B pill, which is not an abortion medicine, would be made more readily available as a primary solution, even when the patient is a victim of rape and incest. When asked if he supported any limits on abortion, O’Rourke said he wanted to return to the standard under Roe v. Wade.

The governor also claimed his opponent supported the “abortion of a fully developed child to the very last second before birth” and “unlimited abortion at taxpayer expense.” O’Rourke said none of those claims were accurate.

“I never said that and no one thinks that in the state of Texas,” he responded.

O’Rourke put his remarks plainly: “I don’t think Greg Abbott wakes up wanting to see children shot in your schools, or for the grid to fail,” he said. “But it’s clear that he’s incapable or unwilling to make the changes necessary to prioritize the lives of our fellow Texans. That’s why it’s on all of us to make sure that we have change at the ballot box.”

Abbott ended with a list of his accomplishments in categories like job creation and education: “I’m running for re-election to keep Texas number one, to cut your property taxes, to secure the border, to keep dangerous criminals behind bars and to keep deadly fentanyl off our streets,” Abbott said. “We will keep Texas number one.”

Boxer Luis Quiñones Dead At 25 – Days After Being KOed