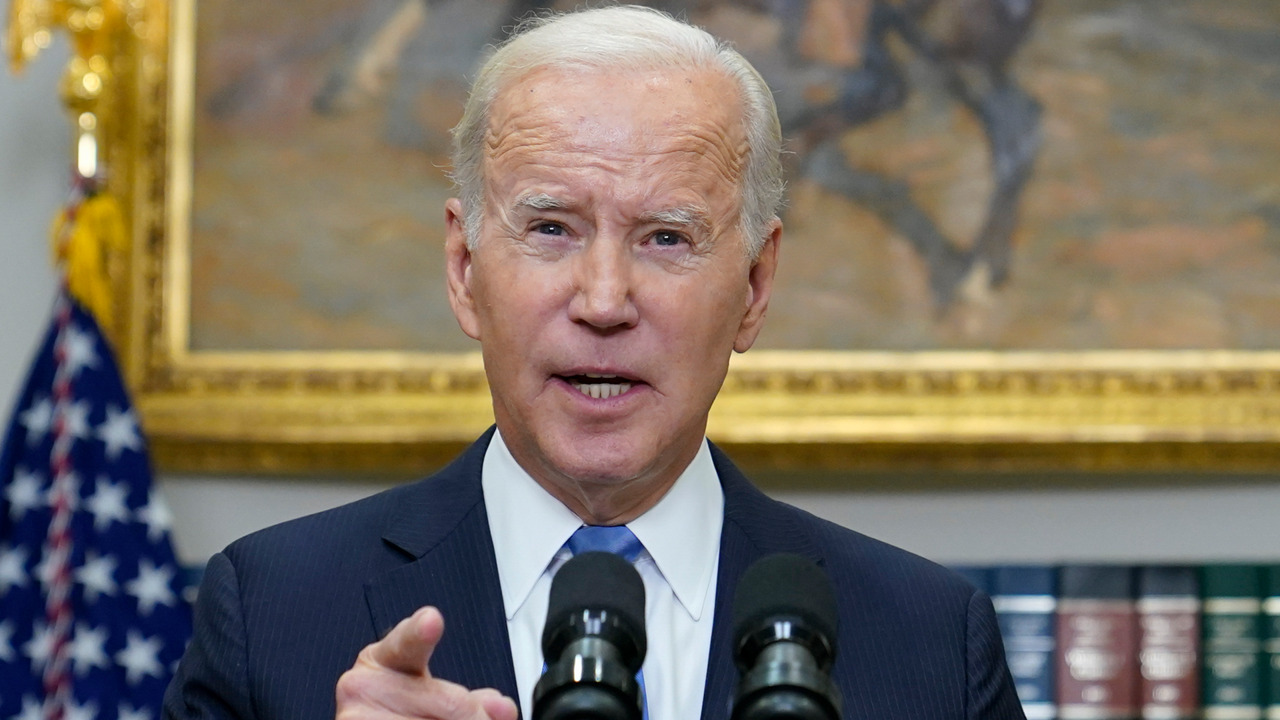 “We will rally the international community to both denounce these moves and to hold Russia accountable,” Biden said. “We will continue to provide Ukraine with the equipment it needs to defend itself, undeterred by Russia’s brazen effort to redraw the borders of its neighbor.”

Biden reiterated this message Friday during a speech on response efforts for Hurricane Ian, pivoting at the end of his remarks to again condemn Putin’s “reckless words and threats,” which he said are a sign the Russian president is “struggling.” The United States and the world will never recognize the sham referendum, Biden said, and Putin “will not get away with it.”

“America is fully prepared with our NATO allies to defend every single inch of NATO territory. Every single inch. So Mr. Putin, don’t misunderstand what I’m saying. Every inch,” Biden said.

The Treasury Department announced on Friday a raft of new sanctions on top Russian officials, including members of Russia’s legislature and central bank officials, warning of severe financial consequences for anyone supporting the annexation attempt.

Secretary of State Antony Blinken said in addition to the “swift and severe costs” the U.S. is imposing on Russian officials and their family members, the State Department will also take action to impose visa restrictions on 910 individuals, including members of the Russian Federation military and Belarusian military officials.

“We will hold to account any individual, entity, or country that provides political or economic support for Russia’s illegal attempts to change the status of Ukrainian territory,” Blinken said in a statement.

Putin’s declaration marked the latest escalation in Russia’s seventh-month war in Ukraine, where its armed forces have suffered surprisingly heavy losses that have eroded Putin’s standing at home.

“I’m sure the federal assembly will support the laws of formation of the four new regions in Russia, four new subjects of the Russian federation,” Putin said in a speech Friday at the Kremlin. “Because this is the will of millions of people.”

During the ceremony, Putin said the four provinces — Luhansk, Donetsk, Kherson and Zaporizhzhia — will be folded into Russia and will be protected by “all available means.” They will join the Crimean peninsula, which Russia annexed after its more limited initial invasion of Ukraine in 2014.

The annexations represent a violation of international law and the vast majority of nations won’t recognize the territory as Russian.

Putin also called on Kyiv for a ceasefire and to return to the table for negotiations, but he made sure to assert that the annexations would not be up for discussion.

“The choice of the people in Donetsk, Luhansk, Zaporizhzhya and Kherson, we will not discuss. It has been made. Russia will not betray it,” Putin said.

He largely used the rest of his speech to air conspiracies and accusations against the West, which he claimed is waging a “hybrid-war” against Russia. He attempted to paint a version of events where the West is pushing a “neocolonial” system and using the “dollar as a power tool.”

The expected pronouncement had been met with fresh warnings this week that Russia will be even more isolated internationally, amid fears that Putin will use the declaration as a pretext to escalate the war, claiming that the Ukrainians are now attacking Russian territory.

“The UK will never recognise Russia’s illegal annexations in Ukraine,” the UK’s defense chief, Ben Wallace, tweeted Friday morning. “Russia doesn’t even control some of these oblasts. The truth is Russia is losing in Ukraine and their incompetent Generals are sending thousands to their deaths to please President Putin’s imperialist fantasy.”

On the battlefield, Russian forces have continued reinforcing units that have sustained greater losses but have not yet made any significant moves since the announcement, according to a senior defense official. Far from preparing for any significant escalation, the Pentagon has seen “nothing that indicates we should change our posture,” the official said.

Putin’s nuclear threats and the annexation decree show the Russian president “responding from a point of weakness and desperation” U.K.’s Chief of Defence Staff, Adm. Sir Tony Radakin, told reporters during a visit to Washington on Friday.

Proclaiming parts of Ukraine as now Russian with no international backing or legitimacy, Radakin said, is nothing more than “the invented reality of Putin, and the actual reality is that he’s declared these four territories as part of Russia, but he doesn’t even have control of those four territories.”

Radakin said neither Kyiv nor its western partners should change course either tactically on the ground, or in the effort to train and equip Ukrainian forces.

“Strategic errors lead to strategic consequences,” he said. “And that’s what’s happened for Putin. His strategic error was his catastrophic invasion of Ukraine, and then that’s played out over the last several months.”

The United Nations was preparing on Friday to consider a U.S.-sponsored resolution dismissing the latest territorial claims and calling on Russia to remove all of its troops from Ukraine.

Russia wields a veto in the U.N. Security Council, which commonly deals with such matters, so diplomats are considering taking the resolution directly to the General Assembly.

At the U.N. headquarters in New York, Secretary-General António Guterres warned that the annexation “would have no legal value and deserves to be condemned.”

He told reporters that “the so-called referenda were conducted during active armed conflict in areas under Russian occupation and outside Ukraine’s legal and constitutional framework.”

“They cannot be called genuine expressions of the popular will,” Guterres added.

“The United States and our allies and partners will continue to assist Ukraine in its fight to defend its territory against Russian aggression,” Blinken said ahead of the Russian announcement, deriding what he called a violation of international law.

Congressional lawmakers from both parties have been united in their calls to increase global pressure on Moscow, including through tougher economic sanctions.

“The international community must unequivocally denounce this illegal land grab, and reaffirm our commitment to helping Ukraine defend itself,” said Idaho Sen. Jim Risch, the top Republican on the Foreign Relations Committee.

Congress is also moving to pass bipartisan legislation, the Non-Recognition of Russian Annexation of Ukrainian Territory Act, that would make it U.S. policy not to recognize any Russian claims over Ukrainian territory. And on Thursday, Sens. Lindsey Graham (R-S.C.) and Richard Blumenthal (D-Conn.) unveiled legislation that would cut off military and economic aid to any country that officially recognizes the annexed territories as Russian.

Several former diplomats and historians likened Putin’s strategy to Nazi leader Adolf Hitler in the 1930s, when he seized German-speaking regions of Czechoslovakia and Poland and similarly held predetermined plebiscites.

“The parallels are eerie and, after decades of over-using the Hitler analogies, we finally have a case where they are apt,” said Daniel Fried, a former ambassador to Poland who is now a researcher at the Atlantic Council, a Washington think tank. “Putin is escalating and the future is uncertain and fraught.”

“The vote will destroy whatever chances — slim at best to begin with — exist for a political settlement between Russia and Ukraine based on mutual compromises,” added Rajan Menon, director of grand strategy at Defense Priorities, which advocates for restraint in foreign policy. “The result is that the war will drag on.”

Paul McLeary and Lara Seligman contributed to this report.

Nick Cannon Is Now A Dad Of 10 – And The Baby Name Is The Most Celebrity Baby Name EVER!!