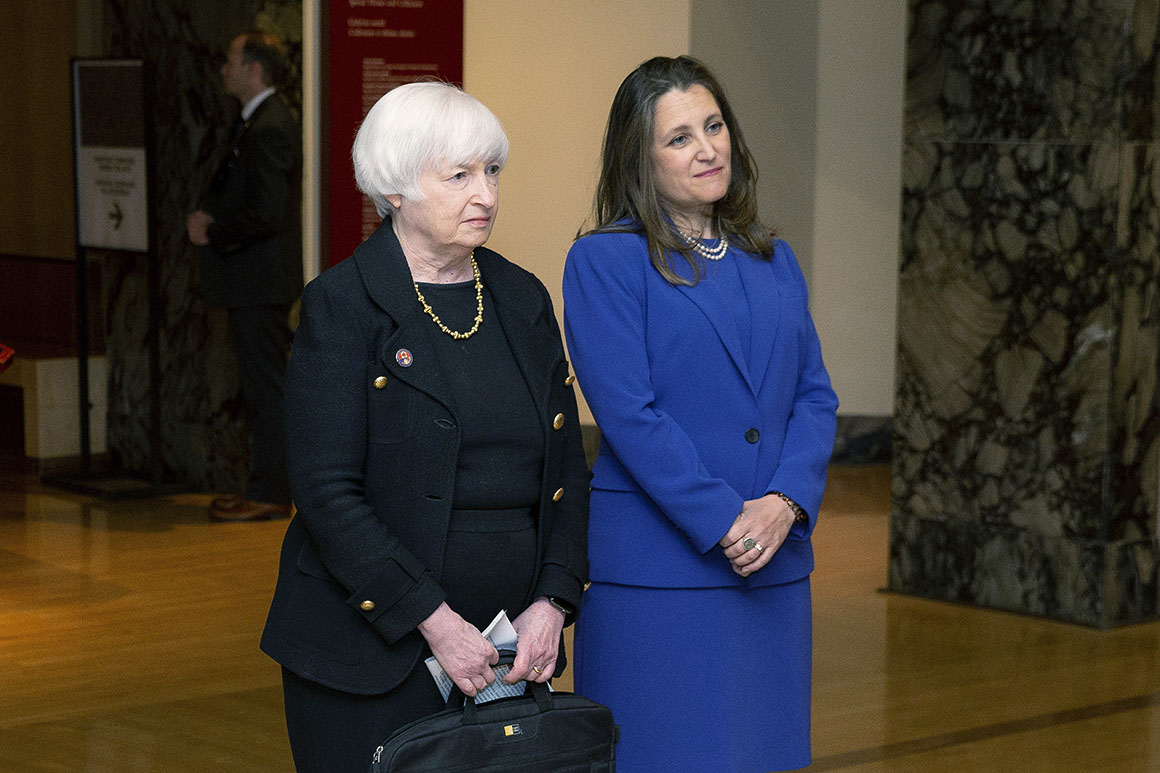 “At the same time, we have to recognize that political conversation and debates are becoming more bitter and more aggressive. … And it’s something that should worry us profoundly as a democracy.”

Aside from the prime minister, Canadian politicians — including Cabinet ministers and opposition leaders — are not automatically assigned security details. But amid a spate of harassment and violent threats being reported against politicians and journalists in recent weeks, the government is facing increased pressure to respond.

On Friday, Deputy Prime Minister Chrystia Freeland was accosted at the city hall in Grande Prairie, Alberta, as she was entering an elevator. In a video widely circulated on social media, a large man approached her, calling her a “f—ing traitorous f—ing b–h,” and told her to leave the province. Freeland appeared to be accompanied only by female staffers.

At a press conference Wednesday in Calgary, Freeland deflected questions about whether she needs heightened security, saying only that she will “always follow the advice” of police. She said she still feels welcome in Alberta, the province where she was born and raised, and where she still has family.

Freeland has spoken recently about wanting political leaders to remain accessible to voters, in contrast with the United States. When U.S. Treasury Secretary Janet Yellen visited Toronto in June, Freeland later recounted, she asked how Freeland’s security detail felt about the deputy prime minister biking to the Royal Ontario Museum to meet her. Freeland said she had to explain to Yellen that she had no such detail.

“A real strength of Canada is that I feel safe being out there on my own,” she said. “I hope that that can continue.”

Other politicians evidently disagree. “It’s time for ministers to have security … worthy of a G-7 country,” Conservative MP Gérard Deltell said Monday on Twitter. Provincial ministers in Quebec, Deltell’s home province, are accompanied by armed drivers who act as bodyguards.

Trudeau acknowledged Wednesday there’s disagreement among members of his Cabinet about whether every minister needs a bodyguard. “I think it’s a very personal decision for many ministers,” he said.

Earlier in the week, Public Safety Minister Marco Mendicino told reporters the government is looking at options to improve security for politicians, but didn’t offer specifics. Canadian members of Parliament are now being issued panic buttons they can use to immediately alert local police.

The incident involving Freeland occurred amid a broader discussion of harassment and abuse directed at public figures in Canada, including journalists. In recent weeks, a number of female journalists, including several journalists of color, have reported receiving violent, misogynistic, racist threats online.

Trudeau and other leaders have publicly denounced the pattern of threats. The Canadian Association of Journalists is calling on police forces to improve their processes for responding to complaints of hate speech and harassment.

On Wednesday, Procurement Minister Helena Jaczek told reporters she believes the impact of Covid-19 on social interaction is partly to blame for the increasing toxicity. “It’s not Canadian behavior,” she said. “It’s surprising.” Jaczek said she was subject to “verbal abuse and somewhat intimidating behavior” during Canada’s 2021 federal election.

The Liberal government has promised to tackle the rise in hate with new “online safety” legislation that would aim to make social media companies more accountable for harmful content on their platforms. But the government’s initial proposals, which included forcing tech giants to take down flagged content within 24 hours, met with heavy pushback and concerns about censorship.

There’s no timeline for legislation to be introduced.

The bill is sure to be contentious, however, particularly if Canada’s opposition Conservatives elect frontrunner Pierre Poilievre as their leader next month. Poilievre has accused the Liberals of “attack[ing] free speech at every opportunity,” and has promised to protect Canadians’ “freedom of expression online.”